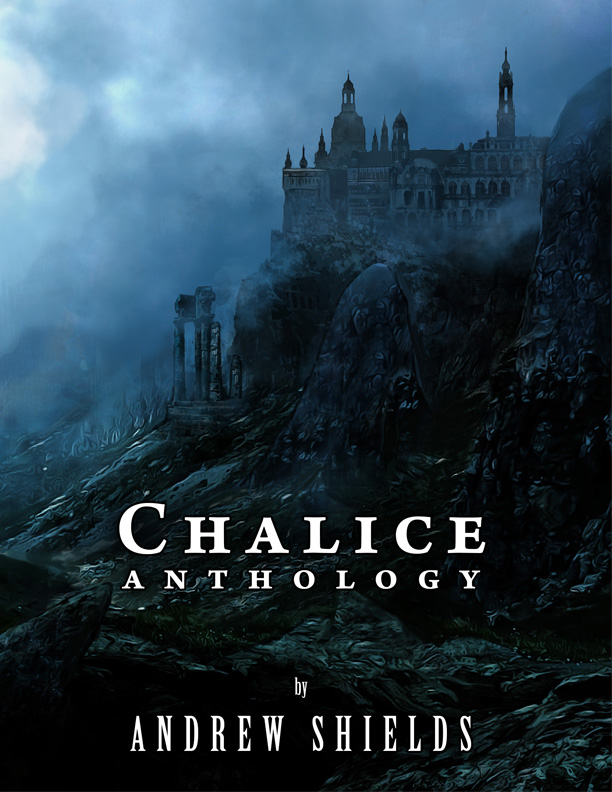 I have released the Chalice anthology! You can get it from Lulu in paperback or ebook format. Special thanks to Vandel J. Arden for the excellent cover!

For the standard hype, check out the entry on Lulu. You are here on my blog, though, so you might want a more personal take.

The Spyra story at the beginning was my take on doing a Sherlock Holmes style mystery, only having some problem-solving twins instead of the iconic sociopathic genius. Also with blackpowder and magic. The focus shifts off figuring out who did what, and more to how to salvage the situation with a minimum of damage to those involved. That’s different than solving a crime. The connections of the Spyra twins are just as important as their intellects. I also really enjoyed having a networking clever man and a highly dangerous and impulsive warrior woman as the twins.

Blood Like Jewels grew out of my game-play experience with the video game Thief. When playing the game, you are most skilled if you can slip through unseen, or escape pursuit; ideally they don’t realize you were there until after you’re gone. But that’s hard. Sometimes it’s easier to whack everybody and then examine the site at your leisure. And both methods (as we affectionately called it, Thief or Thug) create emotions in the player. I wrote those emotions out into complete characters, inextricably linked but antithetical. I also made a coming of age story for a young thief, and played with the idea that the past only reluctantly gives up its secrets, and touched on the power of community and the inevitability of change. Also interesting to me in this one is that the moral center of the story is not the spy, Sight, but instead the young thief, Spider. Decisions made at the climax are certainly frustrating, but may be of interest as the various actors face what they can accept, and what they cannot.

Finally there’s the Lure of the Book, where I enjoy toying with a mashup of the Cthulhu mythos notion of dangerous literature and cosmic indifference and body horror and dangerous dreams, and mix it up with the Keepers from Thief. I also put in a bonus mash-up with a mind flayer, because it fits so  seamlessly. A challenge this story set for me was to write a character who doesn’t talk and hates thinking in words, and make him real and his setting real without full use of conversation and interaction that is my usual preference. It was difficult but rewarding.

These stories were too long to be short stories and too short to be novels, so I wasn’t sure what to do with them. I wrote them over a decade ago. Why bring them out now? I’ve been putting a lot of focus on the Blades in the Dark game, which draws from some similar influences. And, using Lulu to publish has never been easier. I want to share these stories, and I appreciate your interest in them. Thanks for taking a look!

This entry was posted in Uncategorized and tagged blades in the dark, chalice, fiction, sale. Bookmark the permalink.